On November 7th 2019 a symposium took place at the Hamburg State Representation in Berlin, under the title ‘Sex work and human trafficking between regulation and abolitionism – from the perspective of the ProstSchG (the new German law on Prostitution) and the Nordic Model’ (Sexarbeit und Menschenhandel im Spannungsverhältnis zwischen Regulation und Abolitionismus – im Spiegel des ProstSchG und Nordischem Modell)

The new law on Prostitution – Prostitutes’ Protection Law (ProstituiertenSchutzGesetz) – came into force in July 2017, bringing, among other harmful measures, the mandatory registration of all sex workers in Germany.

Sex workers’ organisations, NGOs, human rights organisations and allies’ that support sex workers’ rights in Germany have been pointing to the negative outcomes for sex workers of the law since before it passed and have since documented such harmful effects.

Two years after this laws introduction, abolitionist groups and some voices inside the Governmental Coalition between the CDU (conservatives) and the SPD (social democrats) are calling for the adoption of the so-called ‘Nordic Model’, which would bring in further registration that makes it a legal offence to purchase sex. The argument used for changing the laws from the ProstSchG are that it did not yield expected results as a very low number of workers could actually register given the strict measures in place associated. Hamburg, a city-state, was one of the few states that voted against the law in 2017.

BASFI, the Hamburg Department for Labour, Social Affairs, Family and Integration (Behörde für Arbeit, Soziales, Familie und Integration), responsible for putting into practice the ProstSchG in the city, decided to organise a symposium in Berlin, to open space to discuss the issues with the ProstSchG and call attention to the evidenced negative consequences of the ‘Nordic Model’. Amongst those Invited were policy makers, journalists and other stakeholders.

Following the presentation of Susanne Dodillet from the University on Gothemburg, Sweden, about the intentions behind the Nordic Model, TAMPEP presented on the actual realities of this model of repression on the rights, health and safety of sex workers across Europe who work under such legal regimes. Christine Nagl, one of TAMPEP’s Steering Committee members represented TAMPEP and spoke of the grave situation for all sex workers under the Nordic Model, but particularly the harmful effects on the most marginalised of sex workers, including migrant workers and LGBTQ.

The symposium ended with a podium discussion, with a very lively and intense exchange between the public and the presenters of the day. After that, there was a ‘coming together’ of all pres 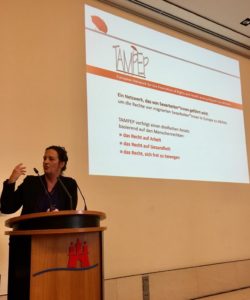 The feedback of the public was very positive regarding an awareness of the Model’s harms for sex workers’ living and working conditions. Well done to all involved in platforming sex workers’ rights in the context of proposed further repression and criminalisation.