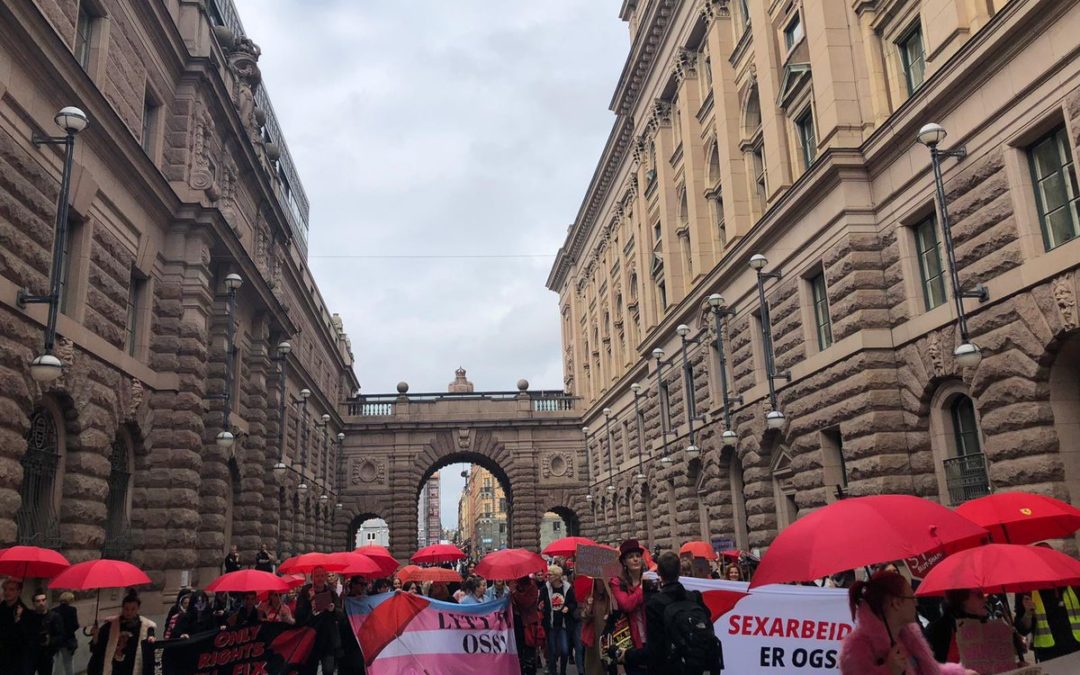 Marking 20 years of the Sexköpslagen, the Swedish ‘model’ that brought in legislation that criminalises the purchase of sex, sex workers and allies from Europe and beyond gathered in Stockholm, Sweden for three days of sex workers-only events, a large protest and an international conference. The events were organised by sex worker-led organisation Fuckförbundet and co-hosted by RFSL, the Swedish LGBTI organisation and the International Committee on the Rights of Sex Workers in Europe (ICRSE).

Almost 100 sex workers gathered to learn from one another on a range of topics; strategies for confronting criminalisation, including and platforming the needs and rights of sex workers experiencing intersectional discrimination and stigma, engaging in ethical research and self-defence. There was also a large demonstration led by sex workers protesting the dangerous effects of the Swedish model and demanding rights!

The conference was then opened to allies on Monday 30th, when 140 people attended the first international sex worker’s rights conference in Sweden. Sex workers and researchers working in countries where the Swedish Model has been exported to (a stated aim of the Swedish Government!) spoke with representatives from diverse NGOs about the dangerous conditions such a legal framework has fostered for sex workers, who now evidence increased violence, decreased autonomy and bargaining power with third parties and clients, an increase in trafficking for sexual exploitation purposes, and an increasing hostility towards sex workers, particularly those who are migrant and trans.

Importantly at the conference, Swedish sex worker-led organisation Fuckförbundet launched its report: ’20 years failing sex workers’. The report, developed in partnership with ICRSE, shows key findings regarding the impact of the sex purchase ban on the living and working conditions of sex workers in Sweden and includes vital policy recommendations including the decriminalisation of sex work and the meaningful involvment of sex workers in policies and services that concerns them.

TAMPEP was proud to be represented by some of our Steering Committee members at the conference and present specifically on the experiences, needs and rights of migrant sex workers. Those of us who couldn’t attend watched as the conference began trending on social media, marking a truly empowering tide shift in sex workers’ rights activism in Europe! We are here. We are fighting. And we will not give up until ALL sex workers’ rights are respected, protected and fulfilled. If you missed it check out Hashtag #FFConf