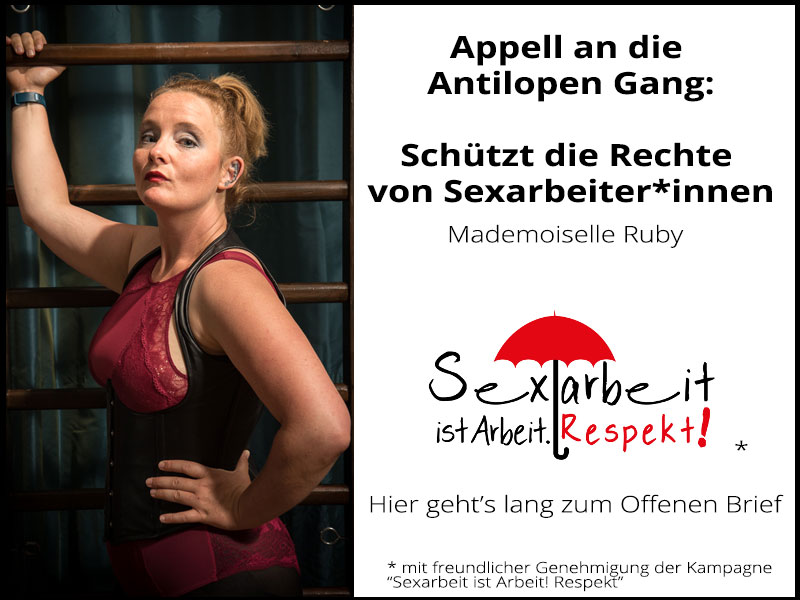 “I am running a campaign to show how artists unwillingly partner up with abolitionists and help discrimination and racism. Let me describe why this campaign is relevant not only in Germany.

Lately we have seen in Germany a development to re-initiate the discourse about so-called “women topics” and sexual motivated violence against women. There have been a couple of incidents in the media and popular culture which deserve our attention:

The very welcome but quite unusual attention which is drawn to the debate about sexism, gender and in general women rights is related to the worldwide crisis provoked by the Covid19-pandemic. As more than 70% of so-called critical workers are women working for minimum wage and receiving clappings instead of a decent wage, and furthermore while in a lot of families homeschooling and childcare is now being performed by women staying in homeoffice, working, but also shouldering the weight and the price of the worldwide pandemic, it is obvious that we have to talk about these big topics, such as: harassment, violence, gender pay gap and women´s rights.

The mainstream media and also some artists in Germany try to contribute to this big and complex debate full of contradictions. Two examples: We had a big event in TV called “Männerwelten” (men´s worlds), launched by comedians Joko & Claas. It picked sexualized violence against women as the central topic. Unfortunately it ended with a lot of advertising for the organisation “Terre des Femmes”, the German section of which is anti-sexwork, abolitionist and rascist.

This campaign is not about this TV-event, but aims into a similar direction. A week before the German comedians Joko & Claas launched their event the German rap combo Antilopen Gang published a new video. There had been a lot of incidents where another German comedian, Oliver Pocher, attacked and humiliated women. There had been forced outings of former sex workers amongst other violations of women´s dignity. The Antilopen Gang published a diss-track where they hatespeeched Pocher as “mean, little creature”. So far so good, BUT: In the very last minute of the video they quoted a letter of German hardcore-abolitionist Huschke Mau, where she claimed being in solidarity with the sex workers being outed by force and demands a “world without prostitution”.

For the campaign I wrote an open letter to Antilopen Gang. I decided that I needed to clarify that the person they have chosen to promote is neither in solidarity with sex workers nor does she defend human rights. She says so, yes, but in the open letter I analysed why Mau and her allies demand the criminalisation of clients and therefore a moralistic approach towards sexuality as such and furthermore an attack towards human rights of minorities.

In Germany the fight of sex workers for complete decriminalisation and social acceptance is very difficult and hard. Our political enemies receive a lot of funding and attention and were believed the “real” feminists. While we, the sex workers, struggle against stigma, financial difficulties and extra hardships during Corona-pandemic, persons as Huschke Mau or organisations as Terre des femmes receive a lot of attention by the media and politicians and can work full-time to pursue their discriminating and abolitionist agenda.

Please support my campaign as we, the whore movement together with our allies, urgently need to state that our feminism is intersectional and inclusive. We urgently need to unmask the agenda of abolitionist organisation worldwide as an attack towards human rights and women`s free choice. We need to show that demands for a world without prostitution and their attempt to “rescue” thousands of sex workers without consent is highly intrusive.

In the campaign I am trying to collect the support of our allies in science and research, politics and counselling and of course, in society. Please do support this campaign, even if you do not recall names or artists.